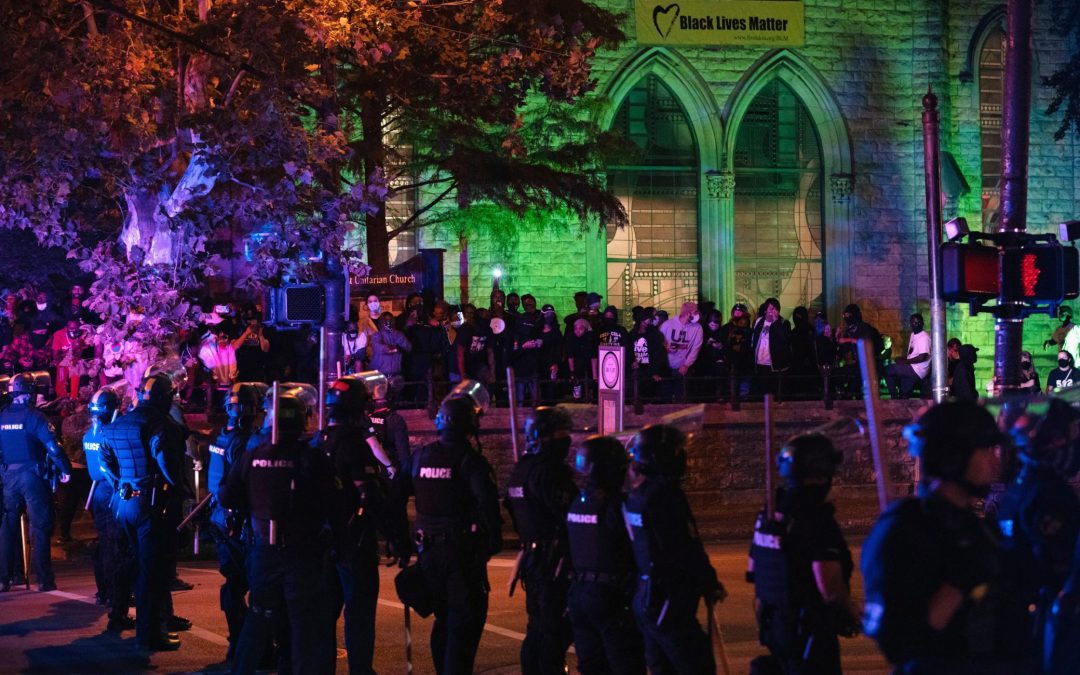 Despite being targeted by police and right-wing protesters, three Unitarian Universalist congregations, like so many others around the country, continue to support Black Lives Matter.

For five nights from September 23 through 28, First Unitarian Church of Louisville, Kentucky, offered sanctuary to anti-police brutality protesters who stayed out past a curfew imposed following the announcement that no murder charges would be filed against the police who killed Breonna Taylor.

State Rep. Attica Scott, the only Black woman in the Kentucky state legislature, was arrested when she tried to enter First Unitarian Church for sanctuary and charged with felony rioting and other crimes, which she strongly denies committing. Scott has pre-filed legislation to end no-knock warrants in Kentucky.

First Unitarian offers sanctuary “because of our conviction that it’s so important that the voices of protest, especially from the Black community and their leaders, be heard. The curfew stifles those efforts,” said the Rev. Lori Kyle, minister at First Unitarian.

During protests on August 23 in Kenosha, Wisconsin, following the shooting of Jacob Blake by Kenosha police, the building of the Bradford Community Church Unitarian Universalist was saved from a fire by two journalists. The church’s road sign, which read “Black Lives Matter,” was consumed by flames.

“While we are relieved that our church home mostly survived the inferno in the lot next door, we affirm that we would rather lose 100 buildings than one more life to police violence,” the Rev. Erik David Carlson, lead minister, posted on the congregation’s website.

In recent weeks, the Rev. Dr. Monica L. Cummings, assistant minister of pastoral care of the Kenosha congregation, has offered meditation and yoga classes to the most impacted communities “to help with the layered trauma: the generational trauma passed on and the day-to-day trauma people are encountering,” she said.

On September 20, Follen Community Church in Lexington, Massachusetts, was targeted by about ten right-wing protesters because of its support for racial justice. Follen held a Worshipful Witness for Justice on its front lawn, which drew about 150 socially distanced people, including UUA President Susan Frederick-Gray, who on Facebook posted, “Grateful to be with the Follen Community Church in Lexington, MA this Sunday gathering in love and power in the face of being targeted for protest by a hate group. Together we are singing, praying, worshiping and declaring #BlackLivesMatter.”

Follen’s minister, the Rev. Claire Feingold Thoryn, said, “White people have been ignoring racism for a very long time and it hasn’t made it go away. I think it’s really important to claim our values and show up and put our bodies on the line.”

Elaine McArdle is a UU World senior editor and a member of First Unitarian Church in Portland, Oregon. An award-winning journalist with more than 20 years of experience, she has also written for the Boston Globe, Harvard Law Bulletin, and others.